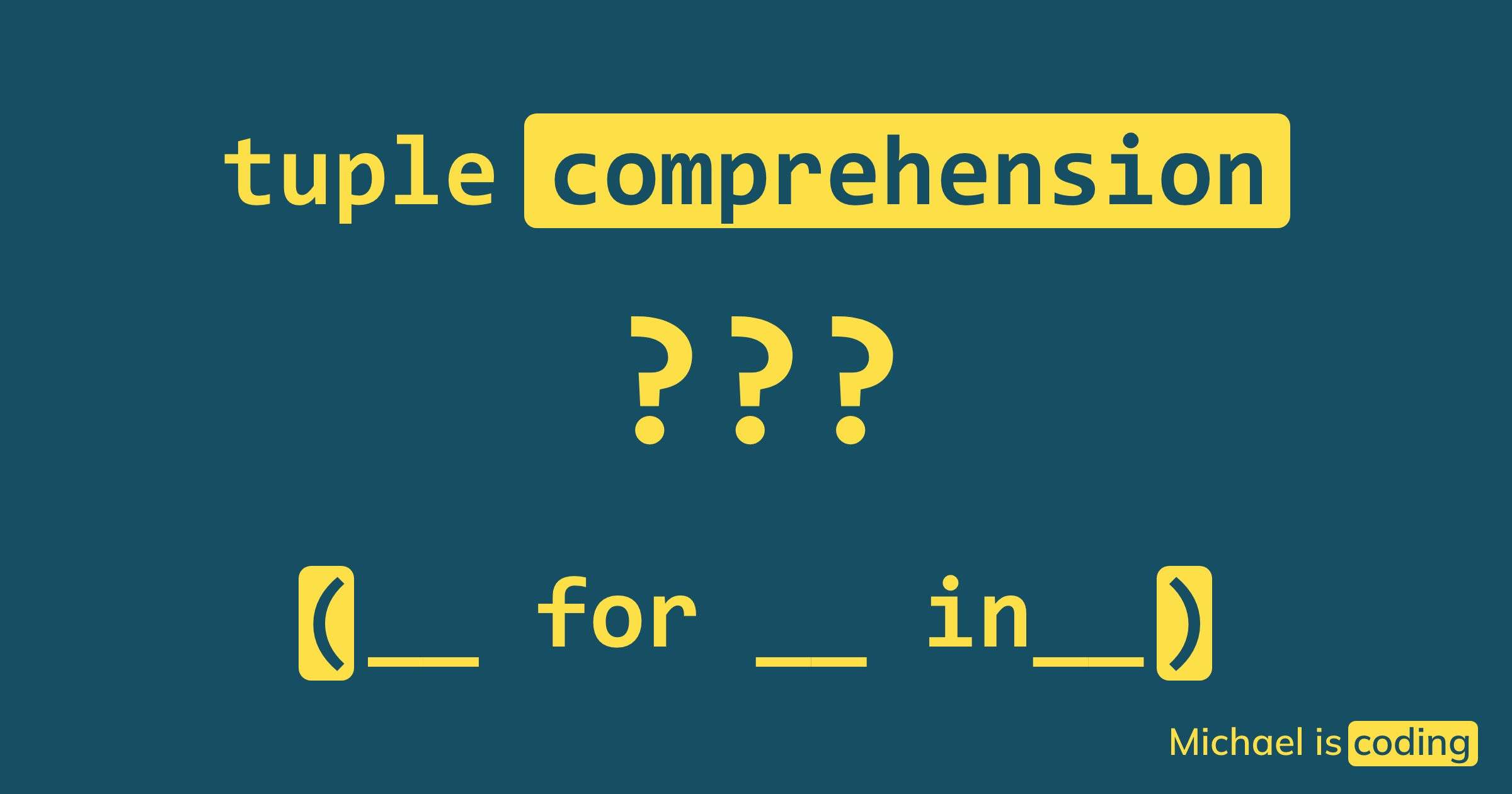 In Python, we have comprehensions for lists, sets and dicts.

But there is no comprehension for tuples. Or is there?

Why there is not a tuple comprehension?Permalink

Firstly, the tuple is usually not used to store a series of homogenous data. We use it more often to store heterogeneous data as a quick way to group related data together.

Secondly, we create a tuple with round brackets: t1 = (1, 2), so tuple comprehension would probably need to look like this:

Sometimes we want to store homogenous data in a tuple.

One reason might be that there is no immutable (frozen) list in Python (not in the standard library). Some teams want to have an immutable collection type in place of a list to make sure that once a list is created, it is not changed.

Tuple fits this requirement. It behaves like a list and has all the characteristics of a list when reading a tuple. (And that is enough because since it is immutable, we don't want to write to it).

So what can we do if we want to use a tuple instead of a list but still enjoy the beauty of a comprehension?

We can have tuple comprehension (almost)Permalink

Ok, so how can we have tuple comprehension?

Usually, a tuple is constructed only with round brackets or even without:

But a tuple is a proper class (object), so we can also create a tuple as any other object - instantiate it using its class name:

Ok, this is not useful. Let's have a look at the documentation to see what the tuple class looks like:

So tuple can be constructed using tuple class and passing it some iterable, e.g. list:

This code is a bit lengthy; there are a lot of brackets.

We can do better.

As seen in the documentation, a tuple accepts iterable as an argument.

As the documentation says:

iterable may be either a sequence, a container that supports iteration, or an iterator object.

An iterator is an object that enables us to iterate (traverse) over an iterable, but it is also iterable itself.

And the easiest way to create a generator is to use generator expression:

We can use this directly when creating our tuple:

That's better (in terms of memory), but there are still a lot of brackets.

Luckily generator expression doesn't have to be parenthesised if it is sole argument into the function so we can write it like this:

And that's it. That is as close to tuple comprehension as we can get. It does require using tuple in front of our "comprehension", but otherwise, it's the same. It is also memory efficient. It doesn't create a list and then a tuple, so it doesn't allocate memory unnecessarily.

I've got some bad news here. It is slower than list comprehension.

Here is the simple measurement for list comprehension that creates a list from 100 numbers and doubles each of them:

And this is the measurement when we create a tuple instead, using our generator:

Let's try a version where we create a tuple by passing it a list comprehension:

3.6 microseconds. So this is still faster to execute than the version with a generator, and we still end up with a tuple. As mentioned before, it allocates memory twice, so be careful when working with large data.

Performance (or memory usage) is the price we need to pay if we want to use a tuple as an immutable list.