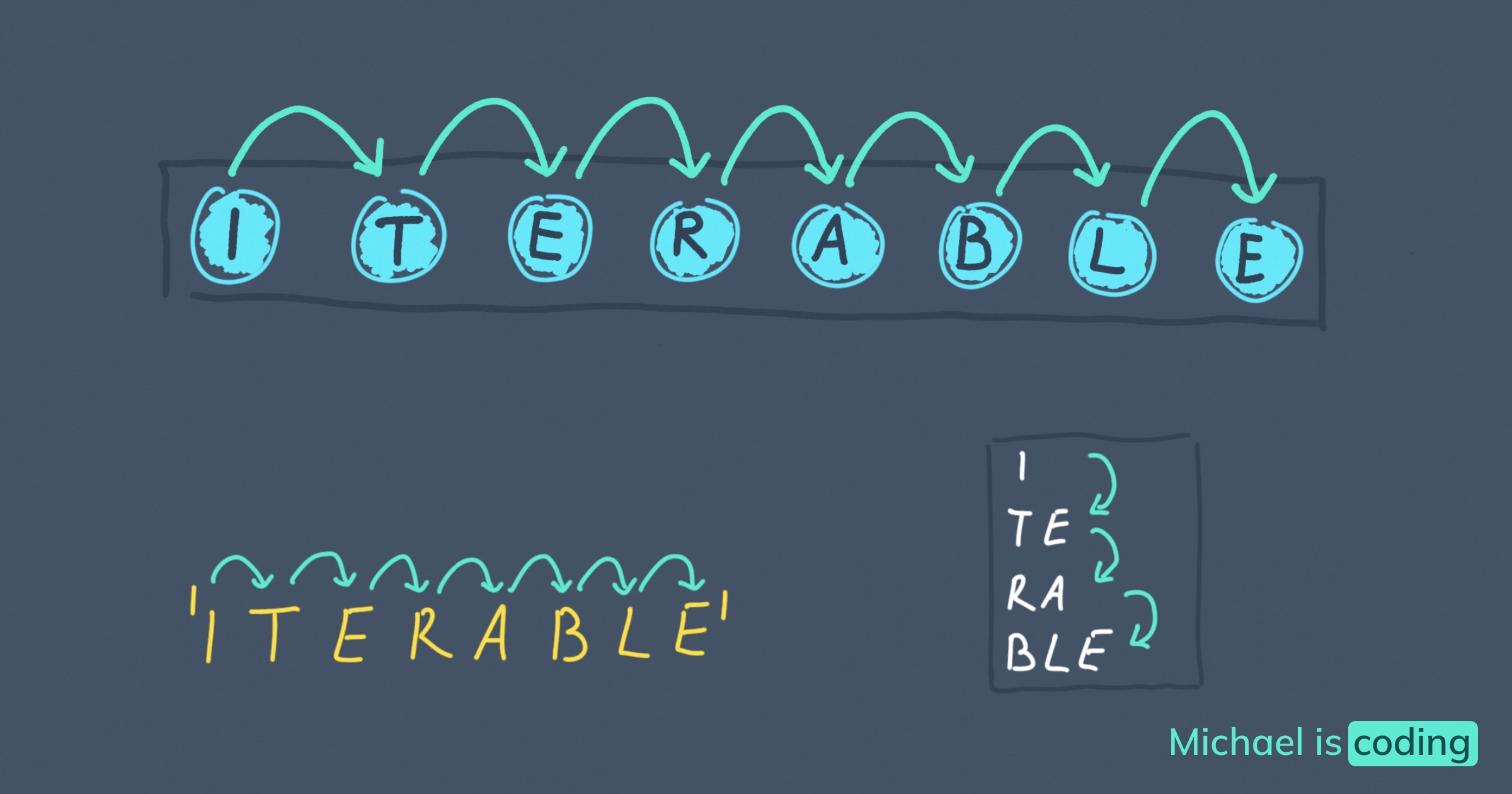 Iterable (iter-able) is an object we can iterate over - we can go over its items one by one.

Python documentation says it is:

An object capable of returning its members one at a time.

We could also say it is an object that allows us to read its values one by one.

When an object is iterable, we can:

The most practical definition is probably this:

If we can use the object in a for loop, it is iterable.

First, let's look at some built-in iterable objects in Python. Then we'll explain what makes an object iterable and how it works under the bonnet.

Collections objects are containers that are used to store collections of data. We set what is in the collection when we create it, and for mutable collections, we can also add items to them later.

All collections objects are iterable:

Many other objects are iterable, although their purpose is not to store some items for us. These objects contain data that can be split into smaller parts or generate some data that we can get one by one. We do not put things into these objects, but we can still read their content using iteration.

Probably the most common iterable is str - we can iterate over its characters:

Say we write a generator function that yields doubles of numbers up to the number provided as an argument:

We can then iterate over the values it produces:

What makes an object iterable?Permalink

To iterate over an iterable, Python first needs to get an iterator (iter-ator) for the iterable.

Iterator is an object that does the actual iteration over an iterable. It feeds data from iterable to the outside world one by one. Iter-ator is used by the for loop to get items one by one.

Based on this, we can say that what makes an object iterable is the fact that we can get an iter-ator for it.

There is no iterable without an iterator.

Ok, so how do we get an iterator for an iterable?

To get an iterator for an object, Python uses the built-in function iter().

This function takes one argument - an object we want to iterate over.

We pass to iter() a list of numbers in the following code. We get back a list_iterator object.

The following code passes just the number 5 to the iter() function. It raises TypeError : 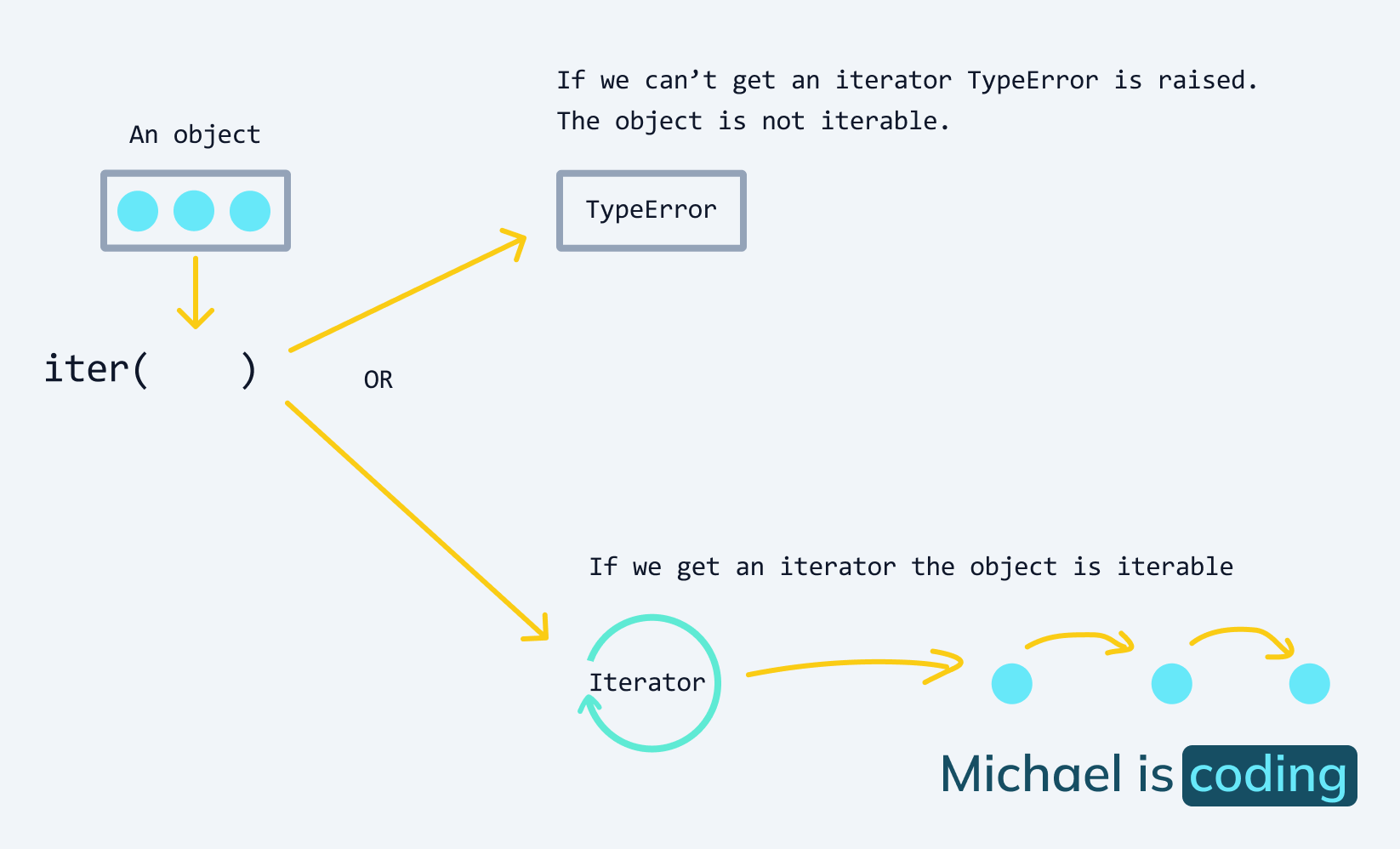 How does iter() gets an iterator for an object?Permalink

There are two ways iter() can get an iter-ator for iterable.

(Before Python 3, the __getitem__ was the only way to make things iterable. This way of making objects iterable works mostly for compatibility reasons as all iterables in Python 3 have the __iter__() method.)

The following image shows how the iter() function gets an iter-ator for an iterable: 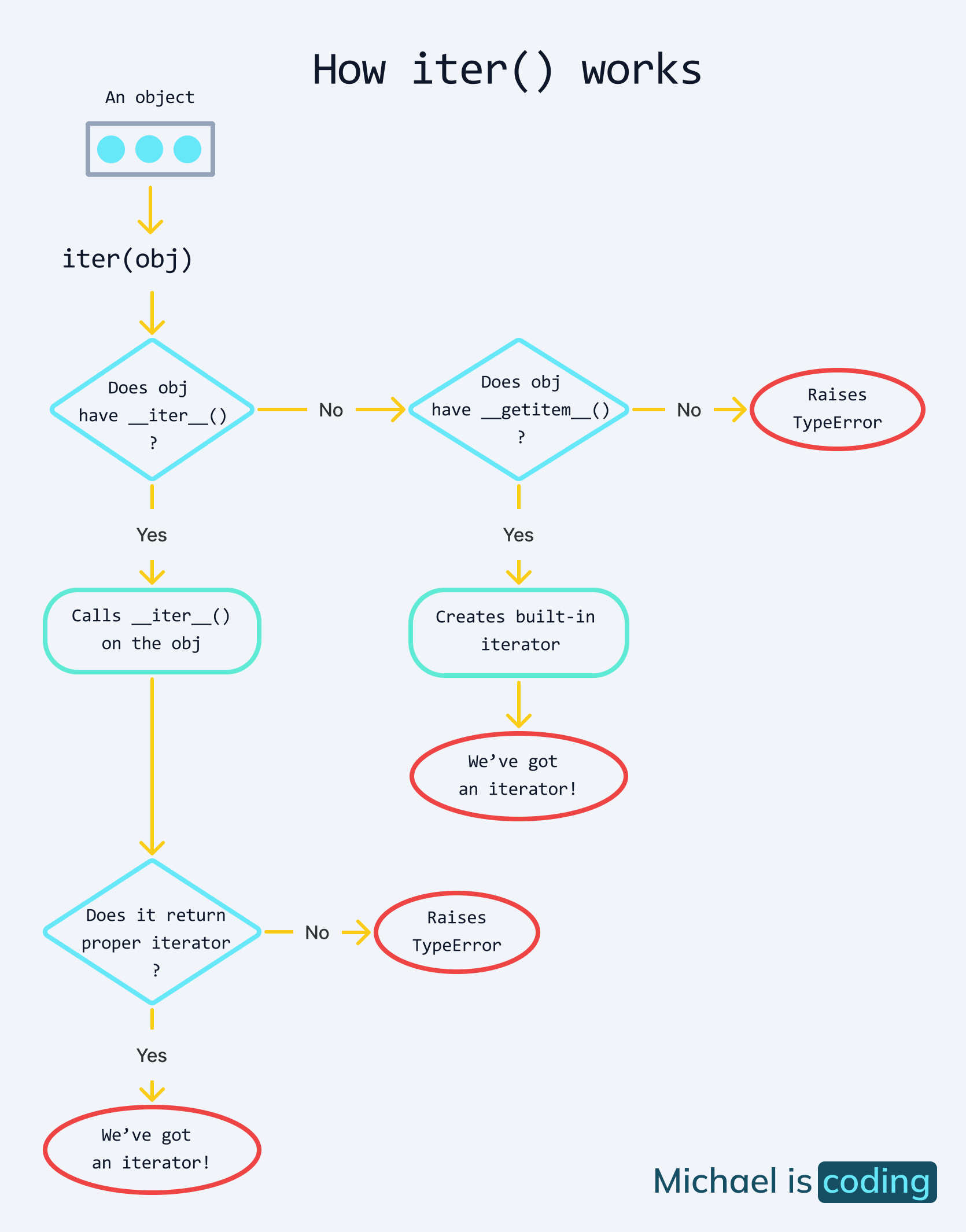 Now let's have a quick look at how we can create our own iterable by implementing the __getitem__() method so Python will provide us built-in iterator.

We will look at the __iter__() method later when we discuss iterators in detail.

Here's a sample implementation of an iterable object that has the __getitem__() method:

Our class ZeroToThreeObject is not very useful, but it is iterable. In the __getitem__ method, we check if the parameter index is 3 or less and if so, we return the double of it. Otherwise, we raise IndexError.

Let's now check what happens when we pass our object to the iter() function:

We can see that we got iterator from iter() function for our object. It works because our object has __getitem__() method.

So our object is iterable, and we can use it as such:

It's worth noting that this object is not only iterable but also a sequence (because it has __getitem__ method - as we discussed before), so we can access its items by index too:

Iterable is a very useful concept as it abstracts away many details about a particular object. Many functions take an iterable as a parameter without specifying if it should be a list, string, generator etc.

The only thing iterable provides is that we can iterate over its items one by one.